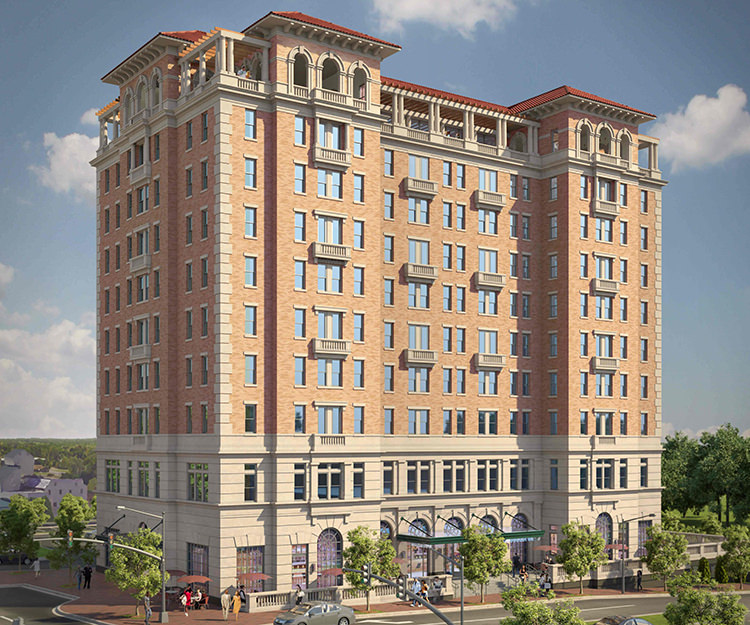 GEORGE DEAN JOHNSON, JR. AND OTO DEVELOPMENT ANNOUNCE PLANS FOR A DOWNTOWN SPARTANBURG HOTEL The over $20 million investment continues a legacy of support for Spartanburg by the Johnson family of companies.

Spartanburg, SC, February 23, 2014- George Dean Johnson Jr. and OTO Development, a local developer, owner and operator of hotels, announce plans to build a hotel in the heart of downtown Spartanburg.

Earlier this evening, the hotel development project proposed by OTO Development received the first reading of City Council approval. CEO Corry Oakes explains, “In evaluating several alternatives for hotel sites in Spartanburg, it was clear that the right choice for the market is to be in the heart of our community. One of the most positive examples of the City of Spartanburg’s vision and leadership has been the focus on revitalizing our urban core. This new hotel will become an important part of the energy and vitality of downtown.”

As award winning developers of hotels nationwide, OTO Development has extensive experience in analyzing hotel markets for potential development. “We have been waiting for the right opportunity to develop a hotel in Spartanburg, where we live and work,” said Oakes. “We are excited that under the leadership of the City, improved market conditions now make this the right time for a new hotel in downtown Spartanburg. The future of our community has never looked brighter.” The hotel site, situated on the corner of Main Street and Daniel Morgan Avenue, is ideally located steps from the restaurants and shops around Morgan Square. The site will consolidate property purchased by Johnson previously and the land which is currently occupied by Event Rentals. This investment will include the relocation of Event Rentals to a new home on West Main Street.

George Dean Johnson Jr., a Spartanburg native, has a long history of development in Spartanburg and is an enthusiastic proponent of the importance of a vibrant downtown. In addition to bringing several corporate headquarters to downtown Spartanburg with partners, including OTO Development, Johnson Development, Pure Barre and American Credit Acceptance, Johnson has invested nearly $60 million to build four buildings with over 330,000 square feet of office space over the last fifteen years.

“Creating good, well paying jobs in Spartanburg is important to all of us at the Johnson family of companies as we know it has been to the Mayor and City Council members,” said Mr. Johnson. “We are proud to employ nearly 1000 people in downtown Spartanburg and we are honored to be a part of the next stage of Spartanburg’s growth.”

“The downtown area has grown into a remarkably vibrant social and cultural scene, and we want to fuel that growth by making it even more accessible to visitors. This hotel’s location will provide a springboard from which visitors will experience the local businesses, restaurants, art galleries, and shops downtown, as well as participate in the many community events held throughout the year in Morgan Square,” said Johnson. “We want this hotel to be a sophisticated complement to the artistic and entrepreneurial fabric that makes our downtown area so unique.”

Additional details regarding the hotel are currently being finalized and will be shared in the coming weeks.

About OTO Development: Established in 2004, OTO Development is an award-winning, rapidly growing hotel development and management company. Our industry leadership position is anchored by a portfolio of great hotels managed by exceptional people. In the past ten years, OTO Development has developed over 60 hotels and currently operates portfolios of hotels for a publicly traded REIT, private equity firms and high net worth individuals. Today, the company continues its impressive growth with more than $1 billion in urban new development projects in Seattle, San Francisco, Los Angeles, San Diego, Manhattan, south Florida and Washington DC. For more information about OTO Development, please visit otodevelopment.com.