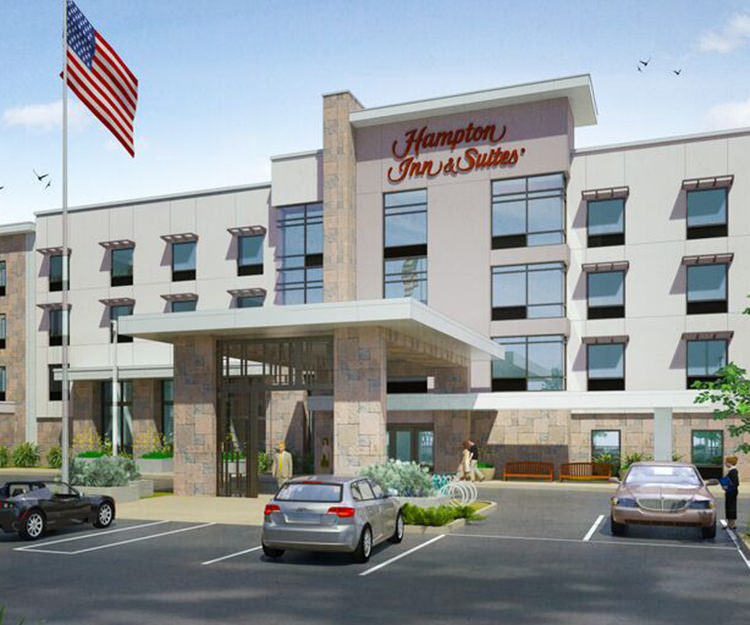 Napa visitors are about to get 115 more choices as to where they lay their heads at night.

A new Hampton Inn & Suites hotel will open at the Napa Century Center, adjacent to the 12-screen Cinemark Theater currently under construction in south Napa, developers announced. The hotel will also have views of the Napa River.

In late May, hotel developer OTO Development of South Carolina signed a ground lease with an option to purchase a portion of land in the Napa Century Center owned by the Gasser Foundation. The price for the lease was not disclosed.

Dave Vierra of First American Real Estate worked with OTO to find the site. Vierra said OTO is one of the largest developers for Hampton Inn & Suites hotels in the United States.

“We’ve been looking at Napa for several years,” Vierra said.

“The occupancy and daily rates have been great,” he noted. “It’s just that (OTO) hadn’t been able to find the right site until now.”

In addition to the hotel rooms, preliminary designs for the property include an outdoor courtyard with a fireplace and seating that can accommodate small events, Vierra said.

“We’re working to create a design that fits with the center. There’s going to be some nice synergy,” he said. “It will be a great new amenity for Napa.”

Room rates for the hotel will be competitive with other hotels of similar quality in the Napa area, Vierra said. “The price point is going to be a home run,” he said.

Joe Fischer with the Gasser Foundation said the property should open in the summer or fall of 2014. The 115-room hotel will be built on 4 acres that Gasser is purchasing from the Napa Sanitation District.

“We selected OTO because we felt that they would do a great job in designing a hotel we would be proud of,” said Joe Peatman, Sr., president of the Gasser Foundation.

“I have seen Hampton Inns that look like stucco boxes. We don’t want one of those,” he said. “OTO is working on hotels in Bellevue (Wash.), Palo Alto and Santa Monica. They understand we need something special and their early design work is right where it needs to be.”

Peatman said the hotel will benefit Napa by providing additional capacity for travelers who don’t want to stay outside the area when they have business in the valley.

“People staying here support our dominant business in the valley and the many restaurants and entrepreneurs in our downtown,” he said. “The TOT (transient occupancy tax) generated by our hospitality industry is an important source of money that the state cannot take away from our city.”

The closest other Hampton Inn & Suites properties are in Vacaville, Rohnert Park and Woodland.

Clay Gregory, CEO of the Napa Valley Destination Council, said an array of price ranges for overnight visitors in Napa is important. The county currently has approximately 5,200 hotel rooms, 3,000 of which are located in Napa.

As long as the new hotel provides an authentic Napa Valley experience, “it’s a good thing for the valley,” Gregory said.

The deal was brokered by local commercial real estate firm Strong & Hayden. Matt Connolly of Strong & Hayden could not be reached for comment Monday afternoon.

The Cinemark Theater will open by November, Fischer said.