Wining (and Shining) at Work 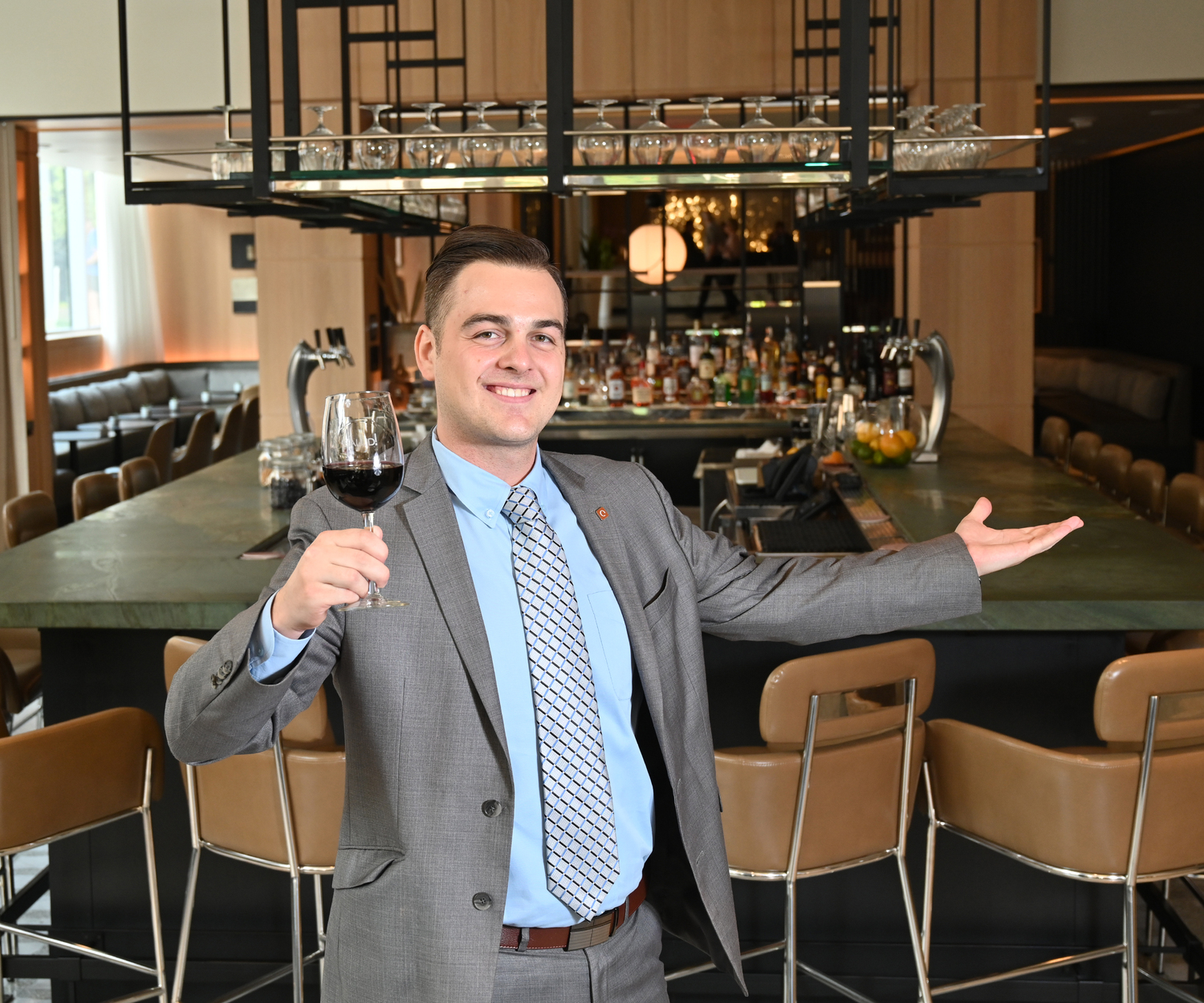 It was a mock interview, but Yarik Kuznets walked away with a real job.

Kuznets met his soon-to-be colleagues remotely during a job-search practice session for students in the Montgomery College Hospitality Management Program. The AC Hotel Bethesda leadership team, a committed program partner, was there to ask the questions graduates could expect from potential employers.

“Even in that virtual setting, Yarik stood out,” recalls AC Hotel Bethesda General Manager Chris Raines, who immediately set up a true face-to-face interview. “As soon as we met him in person, we were sold!”

Now food and beverage manager at AC Bethesda’s Corella Café & Lounge, Kuznets brought a wealth of experience from his long tenure at Congressional Country Club, where he’d worked “every role you can imagine.” He had a freshly minted hospitality management degree and — adding an elevated element to Corella’s beverage program — credentials as a Level 1 Sommelier.

“I love talking about wine,” says Kuznets, who began studying the ways of the grape under the mentorship of Congressional’s sommelier, who’d noticed his inherent ability to read wine and encouraged him expand his knowledge. “Wine is about so much more than just the liquid itself, more than how it smells, how it tastes. It’s about the region where it was made, the techniques used by the winemakers and all the traditions they follow.”

There’s history in every bottle, Kuznets says, and “wine is an opportunity to learn more about the world and the people who live in it.”

To earn credentials from the Court of Master Sommeliers, candidates must demonstrate proficiency in deductive tasting, wine and beverage theory, wine and food pairing, and skills in tableside service. The standards are high, the exams are rigorous and, Kuznets says, the opportunity to elevate the customer experience makes it totally worth it.

Kuznets built Corella’s wine list with an emphasis on Spanish producers — his venue is, after all, named after the hometown of Antonio Catalán, the founder of AC Hotels — and he sees many a wine tasting in the restaurant’s future. But this sommelier is just as enthusiastic about craft cocktails, regionally distilled liquors and locally brewed beer.

“I’m proficient in all spirits,” he says with a smile.

A native Ukrainian, Kuznets moved to Bethesda at the age of 15. He spends most of his off-work hours exploring the great outdoors, doting on the two cats he and his girlfriend adopted during the pandemic, and indulging a guilty love of pizza.

After working at a country club with traditions more than a century old, Kuznets says creating F&B standards from scratch has been an incredible experience.

“We built a beautiful building. We hired an amazing staff. We’ve gotten our food and our beverage list into top shape,” he says. “We want this to be a restaurant worthy of being right next to Marriott’s headquarters.”